How we manage the virtual team

Itzy Interactive is, at its core, three primary individuals working from their home offices.  We’ve found it useful, and cost effective, to contract out specific work around the world but the main group consists of three.  Myself, the ex-financial guy, Will, my brother-in-law and friend of almost 20 years who’s been programming the last 15 years and Cole, a 20 something programmer and designer I met and worked with while re-training for a career outside of the brokerage industry after losing my job with an economy in free fall.  You wouldn’t think that managing a three person team would present many problems, but without the financing for a centralised studio, the challenges presented managing a team working from their homes using email as their primary communication became apparent quite quickly.

Managing our projects this way produced unique problems.  During development of our first mobile title, Itzy3d, the main issue was one of communication.  From the start we were using Mercurial for our version control while we managed our project using Acunote as our project management software.  This enabled us to keep track of our task lists while letting each member know what the other members of the team were currently working on in hopes that we didn’t trip over each other or duplicate work.  The thought was that by using version control and tracking/reporting our progress would keep everyone moving forward together.

The problems we ran into were decidedly human problems.  They were issues of miscommunication that quickly lead to bruised egos.  As all of us can attest to, email is a limited means of communication and the longer we went without speaking to each other, the more issues would simmer.  We quickly came to find that using only email was detrimental to the well-being of the team.  Often recommendations were taken as criticism, omissions made team members feel like their comments were being ignored and issues that seemed straight forward to one team member would be misinterpreted by another.  Added into the mix, the delay between emails due to work load or different working hours often left comments to fester in the minds of team members to the point where they would become blown out of proportion by the time clarifying emails arrived.  As much as we’d like to think we were all professional enough to address these types of issues rationally, the reality was steps needed to be taken to mitigate problems before they grew into more than they needed to be.

Luckily we were always able to address the challenges as they arose, usually by initiating a group voice chat.  This helped us maintain our team dynamic but we certainly couldn’t spend an hour each day chatting about what we were currently working on to make sure everyone was apprised to limit confusion.  There had to be some sort of balance.  While working on Itzy3d we decided that to make sure everyone was moving forward in the same direction we would endeavor to meet, face to face at least every month and a half.  These meetings were always informal and we would alternate the location.  What we found was the meetings enabled us to not only make sure that we were all on the same page on the project, but they also served as a useful break from the monotony of the solitary coding existence we had condemned ourselves to during our regular working week while helping us become more at ease with each other.  In the same room we could work on our “common ground.” 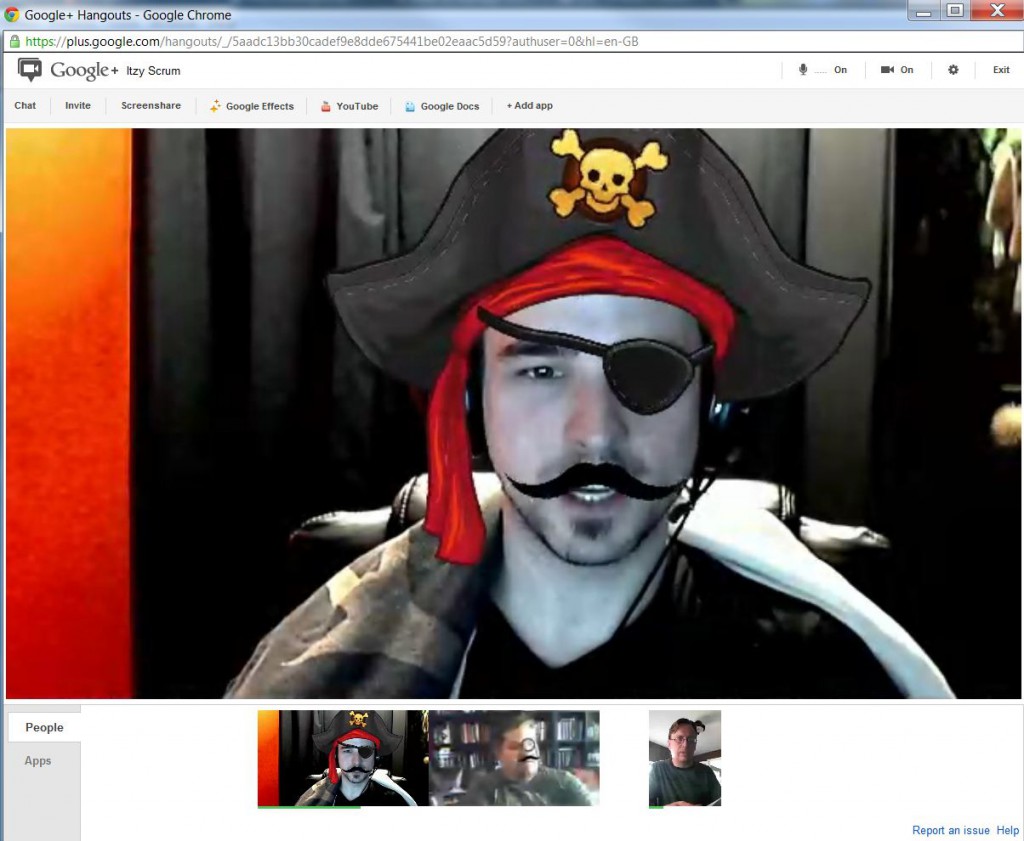 Now as we’ve recognized the benefits of these types of face to face meetings, we’ve taken steps to have more regular meetings without taking the day off required to meet each other physically.  Starting with the development of our new title, Vex Blocks, we’ve mandated a regularly scheduled, weekly meeting via webcam using Google Hangouts.  During these scrum meetings, despite continuing to track our tasks and progress using Jira for our project management software, we still take the time to recap our weekly progress and outline what we plan on working on in the coming week.  Then we take time for a quick brain storming session to share ideas we had during the week.  While many may balk at the thought of using video in these chats due to an aversion to video in general, we’ve found team members are more likely to pay attention to what’s being said when you can see that everyone is paying attention.

So far this seems to have completely eliminated the type of conflicts we experienced during the development of Itzy3d.  We still try to have our physical meetings due to the much needed break it affords, but the weekly scrum meetings have proven invaluable in keeping everyone on track while helping build upon our existing team dynamic.