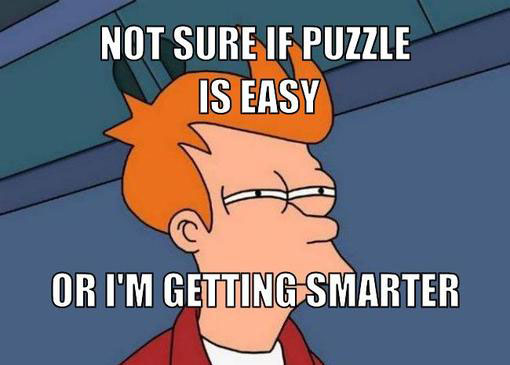 I enjoy a good puzzle.  At my core, I look for patterns in pretty much everything around me and I think we all do to some extent.  Looking for order in chaos is just something that we all do from the time we’re toddlers.  That’s when toddlers aren’t creating chaos, as I’m sure other new parents can attest to.  It’s no surprise that puzzle games are among the most popular games available for mobile devices.  A good puzzle game will keep us captivated for as long as we find it challenging.  I thought I’d take a moment and share my design process as a new game designer working on the puzzle mode for our imminent title, Vex Blocks.

When we started development of Vex Blocks, we set out to create a falling block style arcade game in the vein of Tetris that utilised a device’s rotation ability while offering more than just the standard “tap” interface to controlling the gameplay.  The job of the player was to chain together blocks on the screen by matching colors, symbols or both and tracing out patterns with their fingers to connect the blocks.  Random blocks would fall into the play area and the job was to clear as many as possible, rotating the device as necessary so blocks would fall into different arrangements.  Once we had created the basic gameplay mechanics, we set about trying to think of how we could change the rules of the game to create different gameplay modes and a “nice to have feature if we have the time” was puzzle mode.

So, as development moved along I ultimately found myself faced with the job of creating various puzzles for our puzzle mode.  I had never set out to create a puzzle before, but how hard could it be?  Start simple, right? 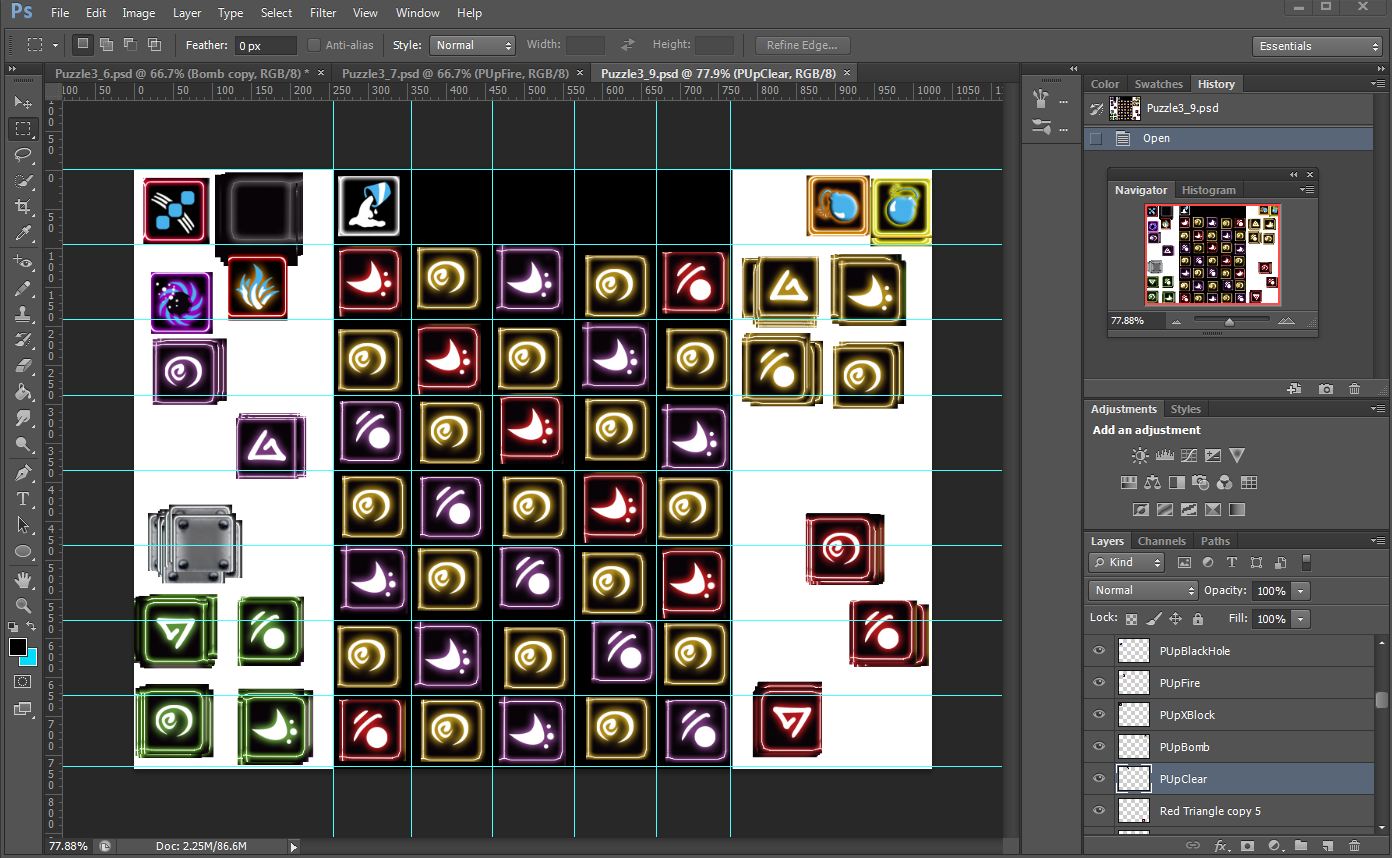 I started by recreating my playing area in Photoshop and went about duplicating the various game pieces so I could simply drag and drop to create the puzzles before coding them into our game.  My next step was to create something aesthetically pleasing before I even thought of how the puzzle would play.  I’d drop in blocks to create geometric shapes and patterns, often drawing inspiration from simple icons as I only had a 5×8 grid to work with.  Once I had a pattern on the screen that I was relatively happy with, I’d start thinking about how it would play.

Here’s where it really started to get fun.  The point of the puzzle mode was to solve the puzzle, clearing all playing blocks from the screen in as few chains as possible, with an upper limit on the amount of chains you could use before the puzzle would reset.  I’d have a look at the blocks in front of me and start tracing out the various options for chains.  If it was too straightforward, then I’d start to throw in obstacles by swapping out blocks that couldn’t be readily chained together, or could only be part of a chain coming from one particular direction.  Or, I’d start with a puzzle and then mimic a few phone rotations to see what I’d end up with.  It was a bit like messing up a Rubik’s cube.  As challenging as a Rubik’s cube is to solve, there’s a certain amount of satisfaction in taking a solved cube and mixing it up for another to solve.  For a few puzzles, that’s exactly what it was like.  Starting with a solved puzzle that was easy to chain together, then scrambling it.  Mmmm…satisfying. 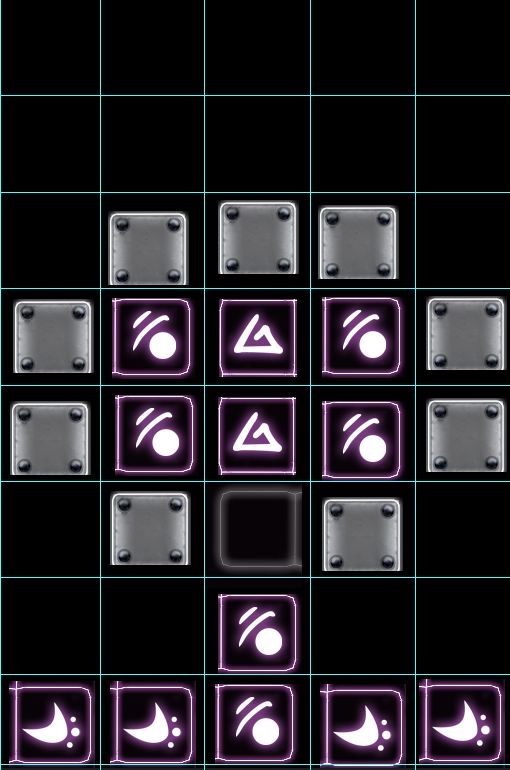 From a design perspective, starting simple was really the only way for this project to evolve.  As I started to become comfortable designing simple puzzles, I’d gradually add in new game mechanics.  What if I add a block that can’t be chained and has to be surrounded?  What if I introduce blocks that stay fixed in one spot despite device orientation?  What if we throw in blocks that explode if you don’t clear them quickly enough?  What about using specific power-ups?  Adding one new gameplay mechanic at a time and exploring that mechanic fully before moving onto the next, then adding them together provided a nice progression in terms of variety and difficulty.  As I became more familiar with process, design started to shift away from the look of the puzzle and instead started with a particular challenge, and then I moulded the look around the puzzle. 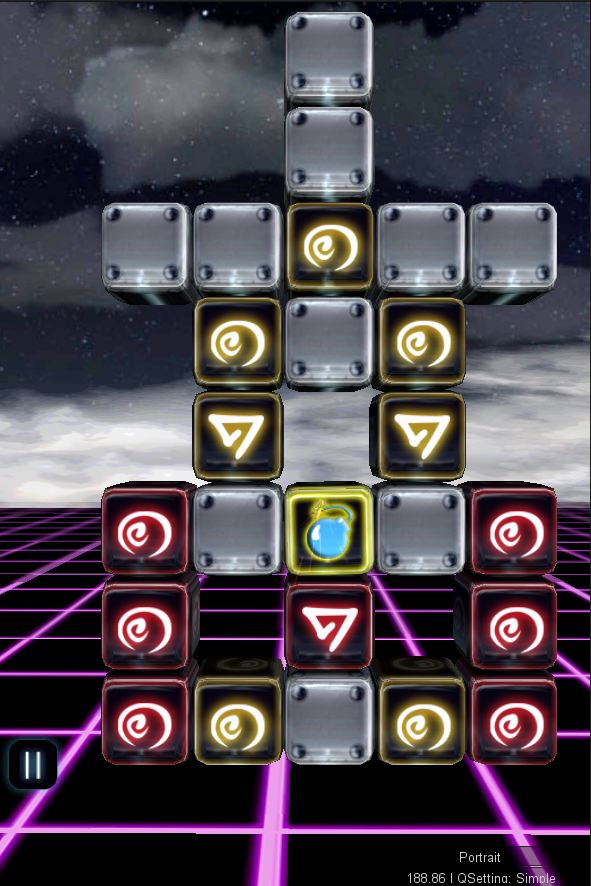 Next up I assembled the puzzles in-game and turned them loose on our testers.  I quickly discovered that what seems easy to me after working on the game full-time for nine months isn’t necessarily as easy for gamers who haven’t spent that type of time with the product.  Test, test test.  Who knew?  There’s a fine line between challenging and “Nuts to this” with gamers.  Thankfully, I’ve received some excellent feedback and what was originally a “nice to have feature if we have the time” has become a challenging addition to the title that extends the gameplay options while offering us the opportunity to release additional content if gamers like what they see.

Kyle grew up in rural Alberta and has been an avid gamer since his first days of playing Gorf on his Commodore Vic-20. After spending countless hours entering and modifying game code from Compute’s Gazette magazines on his C-64 as a boy, he never lost his love for gaming even as he eventually chose a career in finance. More recently, a decade in the brokerage industry, a layoff, an uncertain economy and the birth of his first son has caused him to re-evaluate his career goals. Now, after graduating with honours from NAIT’s Digital Media and IT program with an emphasis on Game Programming and Design he’s ready to pursue a career dream he’s had since childhood and make some videogames.